what is computer network:-

A computer network is a group of computers which communicate with another computer and share their resources , date and applications.

The internet is a ” network of networks’ .internet is means of connecting a computer to any other computer anywhere in the world via dedicated routers and servers.

Cloud computing is delivery of computing services like storage, database , networking, software, analytics, and intelligence over the internet.

the internet of things ,
or iot, is system of interrelated computing devices,
mechanical and digital machines, object , animals or people that are provided with unique identifiers(Uids)
and the ability to transfer data over a network without requiring human to – human or human – to – computer interaction .

the client server model describes how a server provides resources and services to one or more clients. Example of servers, mail server, and file server.

A client a program that runs on the local machine requesting service from server ,
ex:- chrome , Mozilla

A server is a program that runs on the remote machine providing services to the clients when the request arrives at the server , then it responds to the request .
ex:- WWW. google . com

(network interface card):
Nic is also  referred to as an Ethernet card or network adapter .
A NIc is a computer expansion card for for connecting  to a networks using an Ethernet cable and an RJ-450 connector
RJ45:- registered jack 45

Mac address are unique 48 bit hardware number of computer,
which is embedded into NIC card during the the time of manufacturing.
Mac address is also known as physical address of a network device.
.

case statements are a powerful tool for control in programming. … The switch
variable/expression is evaluated once.
Switch statement looks up the evaluated variable/expression in the jump table and directly decides which code block to execute.
If no match is found,
then the code under default case is executed. 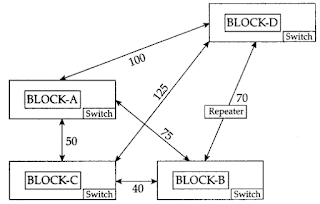 A hub is a physical layer networking device which is used to connect multiple devices in a network.
They are generally used to connect computers in a LAN.A hub has many ports in it.
A computer which intends to be connected to the network is plugged in to one of these ports.
When a data frame arrives at a port,
it is broadcast to every other port, without considering whether it is destined for a particular destination or not. 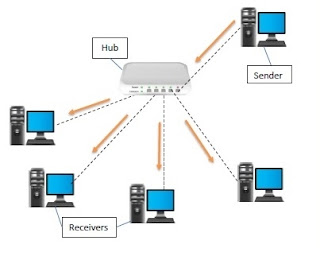 a router is device designed to receive,
analyse and forward incoming packets to another network.
A router is connected to at least two networks.

In satellite communication,
large area could be covered.
This mode of transmission is very useful in multimedia transmission.
Network Topologies
The network topology refers to :-
the arrangement or pattern of computers
(i.e. nodes or workstations), which are interconnected in a network.
Commonly used network topologies are as follows:

Bus topology is also referred as linear topology. Under this arrangement, all nodes in the network are connected by a single length of transmission medium, which is normally a co-axial cable. Both ends of the cable are terminated by terminators. Data transmission from any workstation can travel in both directions. 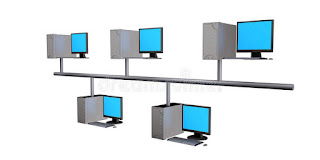 In bus topology, all nodes are connected through a single length of cable, so very short cable length is used.
Extension of network is very easy in bus topology. We can connect new nodes along its length.

When there is any problem in data communication with any node, whole network stops functioning.
In case of any fault in data transmission, fault isolation is very difficult. We have to check the entire network to find the fault.

In ring or circular topology, the nodes are connected in a circular way.
In such arrangement, each node is connected to exactly with its two neighbouring nodes.
* in other words, when the last node in a bus network is connected with first node and the entire network becomes circular network is known as a network using ring topology. 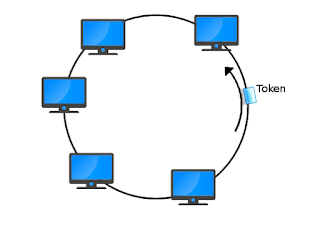 Short cable length is required for connecting the nodes together.
The architecture of network is simple and easy to maintain.

In ring topology, each node is connected in a circular way with its two neighbouring nodes, so when there is transmission problem anywhere in the network, entire network stops functioning.
Fault diagnosis is very difficult in a network formed using ring topology. 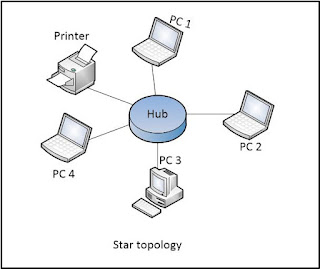 The repeater is a hardware device used in a network to amplify the weak signals, when they are transported over long distances. When the signal is transmitted over a line, then due to resistance and other causes it accumulates noise. Due to this noise, the quality of signal degrades.
So, to improve the quality of signals, repeaters are needed to be installed.

use of amplitude and frequency modulation

The amplitude modulation and frequency modulation are used to transmit data using the method of modifying a carrier signal.

Protocol refers to the set of rules and regulations applicable for a network. The protocol defines standardized format for the data packet to be transmitted through the network, techniques for detecting the errors whenever they arise and methods to correct these errors and so on.
Some of the commonly used protocols are as follows:

HTTP is an application level protocol and it is widely used for viewing information of a web page over Internet. It is a generic, stateless and object oriented protocol.
HTTP consists of a set of requests from the browser of a local computer to the web server and a set of responses going back to the other way.
Though HTTP is designed for the use in the web application but it has scope to be used in future object oriented applications.

TCP/IP is a set of two protocols, i.e. TCP and IP. The Internet Protocol (IP) tells how packets of information are sent out over networks. IP has a packet addressing method that lets any computer on the Internet forward a packet to another computer that is a step closer to the packet’s recipient. The Transmission Control Protocol (TCP) ensures the reliability of data transmission across Internet connected networks. TCP checks packets for errors and submits requests for re-transmission if errors are found.

The PPP is used with dial-up Internet connections including ISDN. It is a layered protocol, which is used for transmitting the data over usual telephone lines. It can provide connection authentication, transmission, encryption and compression.

Remote access refers to the ability to access a computer or a network from a remote distance. Remote access can be established via a line that runs between a computer and Local Area Network. This type of line provide faster speeds but has the drawback of being more expensive. Another suitable method for performing remote access by establishing a Virtual Private Network, which is usually uses the Internet to connect remote site and users together.

To establish a remote connection, both the local machine and remote computer/server must have remote access software.

Remote access software dial indirectly to the network server.
Team Viewer is one of the example of Remote Access Software. It simplifies remote access over the Internet and supports a wide range of devices. It is free for private uses.

The Internet has gained popularity and emerged as an important and efficient means of communication. The Internet is world wide network of networks.
Through Internet, computers become able to exchange information with each other and find diverse perspective on issue from a global audience.
Basic Components for the Working of Internet
Here, we are discussing some basic yet essential components of a network which are very much required for the proper functioning of the Internet.

An IP address is an identifier for a computer or device on a TCP/IP network. It is a way to measure a user’s unique identity.

The traditional IP Addresses (IPv4) uses a 32-bit numeric format and it defines both network and host address.

But now-a-days a new version of the IP protocol (IPv6) has been invented to offer virtually limitless number of unique addresses. An IP address can be static or dynamic.

A static IP address will never change and it is a permanent Internet address. A dynamic IP address is a temporary address that is assigned to any computing device to access the Internet.

Routing is a process which is performed by layer 3 (or network layer) devices in order to deliver the packet by choosing an optimal path from one network to another.

There are 3 types of routing:

No routing overhead for router CPU which means a cheaper router can be used to do routing.
It adds security because only administrator can allow routing to particular networks only.
No bandwidth usage between routers.

URL stands for Uniform Resource Locator. A URL is nothing more than the address of a given unique resource on the Web. In theory, each valid URL points to a unique resource. Such resources can be an HTML page, a CSS document, an image, etc.

In practice, there are some exceptions, the most common being a URL pointing to a resource that no longer exists or that has moved.

As the resource represented by the URL and the URL itself are handled by the Web server, it is up to the owner of the web server to carefully manage that resource and its associated URL.

The Transmission Control Protocol (TCP) is one of the main protocols of the Internet protocol suite. It originated in the initial network implementation in which it complemented the Internet Protocol (IP).

Therefore, the entire suite is commonly referred to as TCP/IP. TCP provides reliable, ordered, and error-checked delivery of a stream of octets (bytes) between applications running on hosts communicating via an IP network.

Major internet applications such as the World Wide Web, email, remote administration, and file transfer rely on TCP, which is part of the Transport Layer of the TCP/IP suite. SSL/TLS often runs on top of TCP.

Just like in road congestion, Network Congestion occurs when a network is not able to adequately handle the traffic flowing through it. While network congestion is usually a temporary state of a network rather than a permanent feature, there are cases where a network is always congested signifying a larger issue is at hand.

In this section, we will discuss five (5) common causes of network congestion including:

how yo learn python for beginners ?